Part of the trusted Microgaming family of online casinos, Platinum Play continues to rise in popularity and earn a deserved name for itself within the online entertainment industry.

As a member of the highly respected Fortune Lounge Group of Web gambling sites, Platinum Play provides a flawless platform for Australian players to place real money wagers or play titles in demo mode, offering a catalogue of hundreds of casino games including pokies, blackjack, roulette, baccarat, craps and unique titles like scratch cards, bingo and keno. Some notable games to try at Platinum Play are detailed below.

Unfortunately, Platinum Play does not cater to the American market. If you’re looking for a safe, reputable casino site that accepts US players, read our USA casino guide.

Untamed Series of Pokies – the Untamed Series of online pokies includes four of the most graphically advanced and feature-packed titles Microgaming has ever released: Untamed Wolf Pack, the Untamed Bengal Tiger, the Untamed Crowned Eagle and the Untamed Giant Panda. These 5-reel and 243 ways to win pokies each have their respective beautiful wild animals act as distinctive wilds, with brilliant scatter symbols (the eye of the animal) and ‘lucky nudge’ icons featuring, too. The gamble feature available within each slot can be classified as its own stand-alone game, where players get the chance to double their winnings again and again.

Cool Wolf Pokies – this 243 way pokies is loosely based on the 1985 movie starring Michael J Fox ‘Teen Wolf.’ It follows a regular teenager who loves all the regular adolescent things; girls, cars and popularity; but under the surface he’s not your typical teenager, as he secretly shape shifts into a werewolf at night. This awesome pokies game uses a fabulously funky retro theme, with cool animation that will keep you hooked. Along with a bunch of great bonus features, the stand out bonus in Cool Wolf is The Howling Wild, which is triggered at any time and guarantees a win every time. 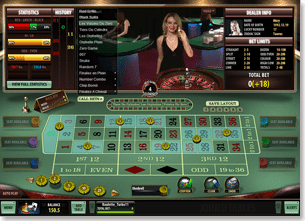 Live Dealer Multiplayer Roulette – a combination of computer-generated online roulette and the real thing, live multiplayer roulette maintains the social interaction of a brick and mortar casino while adding convenience – bringing a genuine roulette experience to us. Standard European roulette rules are used, and up to seven players can play simultaneously, with chat options allowing players to interact with others around the table.

Games are played within fixed time limits, adding to the excitement, and are operated by real human croupiers (Playboy Bunnies if you so desire) whom we watch over a live streaming video feed. Microgaming’s live croupier multiplayer roulette has a beautifully realistic feel and is arguably the best format to play real money roulette – no crowds, real dealers, European rules, live chat and stunning graphics. Also enjoy live blackjack and live baccarat.

Cyberstud Progressive Poker – a progressive jackpot poker game that has brought in some huge winners. At the time of writing, the current jackpot prize pool at Platinum Play was a tempting $108,516 and rising by the minute – a highly lucrative game that especially appeals to high rollers. This poker variation sees the player competing directly against the dealer rather than other players, with a variable paytable based on the different potential poker hands. Cyberstud Poker is a great variation for those savvy with table card games like poker and blackjack but also accessible for new players. Play the $1 jackpot side bet and win if you hit a flush ($50), full house ($100), four of a kind ($500), straight flush ($20,000) and a royal flush (entire jackpot). 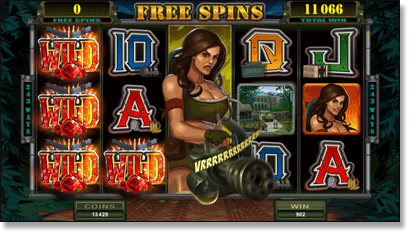 The Girls With Guns Series – the smoking hot Girls With Guns pokies series began with Girls With Guns: Jungle Heat and due to its enormous popularity, it was soon followed with a sequel, Girls With Guns: Frozen Dawn. These two Microgaming pokies follow a bunch of tough, sexy female commandos on their mission to defeat evil and save the world. The first game is set against a swampy jungle background as the girls set out to attack a notorious drug lord, and the second is set against an icy backdrop as they stop an impending global war. The enticing bonus feature offers 15 free spins and the chance to win some huge payouts. Our fingers are crossed there’s already a third instalment to this leading slots series in the works. Check out the Girls with Guns pokies.

Freezing Fuzzballs Scratch Card – this online scratch card is quite true to real scratch cards and just as easy to play. It follows an arctic theme containing cute little critters like Eskimos, seals, polar bears, fish and penguins. The scratch card itself consists of a three x three grid made up of ice blocks, and the aim is to melt the ice blocks to reveal the critters that lay underneath. An appearance of three of the same creatures on the grid results in an instant win, with the lowest symbol being the penguin paying at a two x multiplier, and the Eskimo being the real winner with a tasty 2,500 x multiplier. Freezing Fuzzballs scratch cards can be purchased for as little as $0.50 and for a maximum bet of $10.00.

Online Keno – Keno players will be thrilled with this straightforward online Keno game offered at Platinum Play – it’s simple to play and offers decent sized real money prizes, without any skill required. As the ultimate game of luck, this online keno game allows users to easily click on the board to select their chosen numbers, with the paytable clearly displayed on the left-hand side of the board. Click ‘play’ and hope to land your matches. Online keno at Platinum Play is a great alternative to some of the more strategic casino games. Play keno online legally and with real cash.