Bingo has always been a social game, offline and online. Any quality dedicated bingo site will have advanced chat features as a part of its games so you can talk to your opponents, make new friends while you play and catch up with and play alongside people you already know. With a little organisation you can arrange to meet in the same room as your friend, and play the same game of bingo together.

Most bingo sites are made up of online “rooms” which will have different game types run at different times. Each room is given a name so you can navigate the site easily and find what you’re looking for. This system of bingo rooms also means you can connect with your friends and find each other to play in the same game.

In all True Blue Bingo games there is a live chat feature were you can message other players in your room instantly, and you’re free to talk as little or as much as you would like to. You’ll find that many players in a bingo game won’t be active on the chat feature. If you want to play bingo and have a chat at the same time we recommend joining one of True Blue Bingo’s ‘Party Nights’ games of bingo, which are advertised as a social playing space – it’s highly likely the other players involved will be up for some banter. 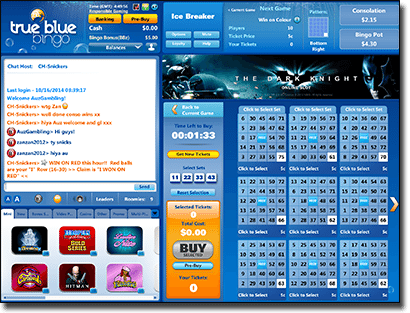 True Blue Bingo also has special chat game promos, where you actually win bonuses and prizes for being active on the chat feed during the game. For example, it runs a game called ‘Bag A Bonus’, where if you don’t win you can grab a bingo bonus reward prize by being the first player to claim it in the live chat feature (and you must have been active on the chat feature prior to as well). Chat games won’t be run if there aren’t at least two active chat players.

There are chat hosts in every bingo room at True Blue Bingo so there is always someone on hand to answer your questions and provide whatever help is needed.

Chat hosts at Aussie Dollar Bingo are dedicated to providing a really personal service where you’re encouraged to get to know the team. Each team member runs a different specialised chat game. These specialised chat games generally change monthly so check out the chat promo page to find out which hosts are running which games. This December the chat host games are;

Kitty Bingo has a live chat feature in many of its bingo rooms. Head to its chat games if you want to play side games while a main game of bingo is underway. The chat host running the chat game will explain the rules and details the prizes you can win in the side game, its chat games will usually give away things like bonus Kitty Loyalty Rewards points and free playing cards for other bingo games.

Chat games are held round the clock, everyday in the Kitty Cat Room. Other chat games are also run in other rooms although they vary which ones, check Kitty Bingo’s homepage for more details.

What If I Need Help to Chat?

Many bingo games will have a chat host who helps the game run smoothly; should you have any questions or queries you can direct them to your chat host and you’ll get an answer almost immediately. Chat hosts will also give you regular updates on how a game is progressing and will provide any other information you may need to know. Of course, the live chat features and the use of chat hosts varies between games and sites. A good chat feature can add a great social element to a game of bingo, so it’s worth knowing which bingo sites do it best.

Sign up for an account at TrueBlueBingo.com today and redeem generous welcome package bonuses, play high-quality online housie and enjoy the sophisticated social chat features in every single one of its games.