Although released many years ago, Avalon II remains one of Microgaming’s most popular and loved online pokies games, continuing on the popularity of its predecessor, the original Avalon pokies. This five-reel video pokies game first became high demand due to its 243 ways format and large number of intricate bonus features, and remains popular today for these reasons despite being visually outdated.

How to play Avalon II 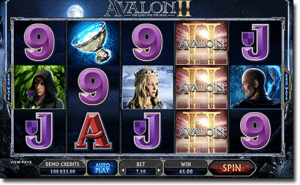 Avalon II: The Quest for the Grail follows a mythical theme based on the legend of King Arthur but with an entertaining choose-your-own-adventure style format which remains unique to this day.

Once you’ve signed up for an account with one of our recommended casinos, make a real money deposit using a safe payment method like Visa, MasterCard, Neteller, Skrill, Paysafecard or direct bank transfer. You also have the option of playing Avalon II for free-play in demo mode first to see if you like the game before making a real cash wager.

Once you’ve loaded the game, use the arrows alongside ‘coin size’, ‘coins’ and ‘bet’ to increase or decrease the amount of money you wish to bet per spin. Remember this is a 243 ways game, which means winning combinations can appear anywhere across the reels. You can also choose to activate the auto-play feature, which allows the computer to play up to 500 spins on your behalf, but be mindful this is a quick way to chew through your bankroll. Once your bet is in place, hit the spin button and sit back and watch the magic happen.

Avalon II is so packed with special features it can be a little overwhelming at first, with much more going on in this game than you’ll find in even the newest, most innovative pokies. We’ve broken down each bonus feature and special symbol in an attempt to counteract any confusion with newbies to this game:

The eight Holy Grail missions in Avalon II are explained below:

Given the overwhelming popularity of this game, you’ll find Avalon II at all Microgaming powered casinos along with a vast majority of multi-provider venues. When it comes to safe, licensed casinos accepting real money bets, these top casino sites get our vote:

Avalon II can be played at all of these casinos in instant-play mode directly over your web browser, while Royal Vegas, All Slots and Casino-Mate also offer the option of downloading exclusive casino software. As Avalon II is one of the most popular online slots on the Net, you’ll also find it at most mobile casinos optimised for play on smartphones and tablets for both iOS and Android powered devices.

At first glance it’s easy to be turned off of Avalon II – the graphics are subpar and very outdated compared to the level of animation we’re used to seeing in new pokies from developers like NetEnt, Thunderkick and BetSoft, but once you start playing this real money online slot and triggering those huge, exciting bonus features, it’s easy to see why so many players are hooked on Avalon II. There really aren’t many pokies which compare to this one as far as the level of detail and variety which has gone into the bonus games, so it’s definitely worth a try, for seasoned players and beginners.

Play Avalon II at Royal Vegas Casino and claim up to $1200 in welcome bonuses upon making your first four real money deposits.