If you’re a fan of comedy movies, chances are you have seen Bridesmaids more than once. This 2011 chick-flick with a twist continues to top the list of film reviewers everywhere as one of the funniest movies of all time, and Microgaming didn’t hesitate to get on board with Universal Studios to bring this star studded film to the reels of a spectacular online pokies game.

Bridesmaids was produced by Judd Apatow and stars Kristen Wiig, Maya Rudolph, Melissa McCarthy and Australia’s own Rose Byrne and Rebel Wilson. The plot follows a down-and-out Annie (Wiig) as she competes against the ‘perfect woman’ (Byrne) for the position of Maid of Honour in her best friend’s wedding, with hilarious and cringe-worthy consequences. The film grossed over $288 million worldwide and set a new benchmark for females in comedy. Read on to find out how the pokies game stacks up against the film.

How to play Bridesmaids

Bridesmaids is a five reel, 40 payline video pokies game set against a hot pink backdrop filled with Annie’s custom made cupcakes. It features screen grabs and scenes from the movie itself, with symbols made up of the actual Hollywood characters which makes for an accurate game adaptation.

Specifics of the Bridesmaids slot game are as follows: 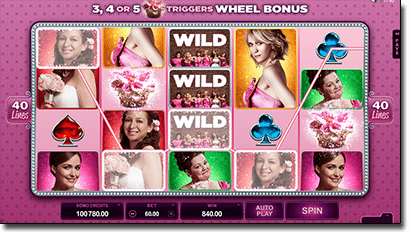 To play the game, simply set your bet using the plus and minus symbols on the bet button (or click the arrow at the top of the box to customise your bet further), hit spin and watch the reels come to life. You can also select the auto-play option and set a designated number of spins for the computer to activate on your behalf so you can hopefully win some big bucks without lifting a finger. 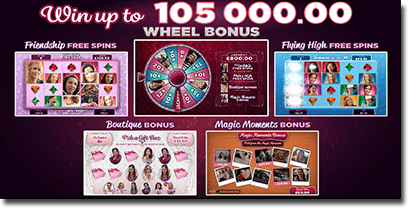 Wild symbol – the Bridesmaids logo serves as the games wild symbol, which substitutes all other symbols except the cupcake scatter to form a winning combination. Stacked wilds also feature and can appear in both the base game and during free spins.

Scatter symbol – the scatter is the cupcake symbol and all scatter wins are multiplied by the total bet staked and added to payline wins. An appearance of three or more cupcake symbols trigger the incredible bonus wheel.

Bonus Wheel – the Bonus Wheel is where all the biggest action happens. Once you’ve landed on three or more scatter symbols, you’ll be redirected to spin the Bonus Wheel to land on either a selection of Cupcake Boosters or one of these four great bonuses:

Where to play Bridesmaids online

The Bridesmaids online slots game shot to instant popularity upon its release in early 2015, and continues to be in high demand. You’ll find it at all Microgaming powered casinos, along with a majority of multi-provider venues, with our favourites including:

For Microgaming to take on such a popular movie, the stakes were set high, but they definitely succeeded in creating a fun, action-packed slots game which retains the essence of the Bridesmaids movie. We love the game uses photographic symbols of the cast and shows short clips from the film – it adds so much to the player experience and is something not all licensed games successfully pull off.

It is quite a feminine looking game, which may be a deterrent to those carrying the Y chromosome, but the pretty pinkness of it all shouldn’t be an instant turn off. The addition of the Bonus Wheel opens up four additional bonus rounds, which is much more than most pokies and is the real drawcard to this game, so whether you like the movie or not, the bonus features alone make it well worth playing.