Join Gonzo on his quest to El Dorado with NetEnt’s first online slot which made Avalanche Reels one of our favourite features. Featuring incredible 3D graphics, intensive audio and some of the best features the top provider has to offer, you can probably already tell what our verdict is going to be on this pokie.

Gonzo’s Quest is made up of 5 reels and 20 paylines, with coins ranging from $0.01 to $1.00 and a minimum bet of $0.20 and a maximum of $50 per spin.The graphics are stunning and the features are entertaining – a perfect combination for a real money pokie which offers a 96% RTP.

Where to play Gonzo's Quest online

When we first open the title, a short introductory video appears of Gonzo who seems to be based on Gonzalo Pizarro – a Spanish conquistador who is looking for El Dorado. The video is quite comical as he jumps off the boat and into the water to swim ashore, but you can skip the theatrics if you want to get straight to gameplay.

The Net Entertainment slot’s reels then appear but since the symbols are stone blocks they look more like a solid concrete wall than independent reels. Once you press play, you will see them in action as they fall away and new one’s clunk back into position.

These reels are positioned with the backdrop of a South American jungle and Gonzo hangs out by the reels, and is quite animated throughout gameplay. Additionally, the coin size adjuster, the bet level, and a button to opt for max bet, are all located under the reels.

A multiplier progress bar is situated at the top of the reels on the right hand side which ties in with the Avalanche Reels feature.

The online slot’s soundtrack features the noises you would expect to hear in a jungle – chirping crickets and tweeting birds – plus special audio effects for when you spin the reels, including a clunking noise of the stone symbols. You can mute this in the bottom left hand corner.

NetEnt have created a visually stunning pokie with Gonzo’s Quest and every symbol has been crafted to fit in with the theme. 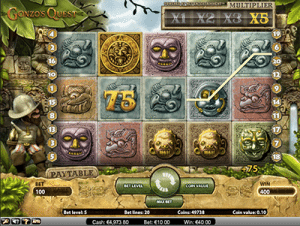 The lower value symbols include the light blue stone, the red stone, and the orange stone, with five of the orange stones scoring 100 coins – the top payout for these symbols.

The middle value symbols include the purple and the yellow stone symbols, with five of the yellow symbols scoring 500 coins.

The higher paying symbols include the green and the blue stone symbols, with five blue stones scoring the top payout here of 2500 coins.

There’s two other important stone symbols to keep an eye out for including the Wild, which is the stone with the question mark, and it substitutes for any symbol to complete the highest winning combination.

View the paytable by clicking the link under the reels to view all of the payouts.

This pokie made us fall – excuse the pun – in love with the Avalanche Reels feature. This feature sees winning symbols explode and new symbols falling into place for another chance at a win. This is essentially a free spin, and the best part is the more spins won consecutively the higher the multiplier applied – from 1x, 2x, 3x and finally 5x.

This can see some huge payouts, which is why we love the Avalanche Reels feature so much.

If you didn’t figure out in the first paragraph, Gonzo’s Quest is one of our favourite online slots predominantly due to the Avalanche Reels feature. It offers free re-Spins on every win, with the chance to win a huge multiplier just in the base game.

The Free Falls feature is also well received, with 10 Free Spins meaning we can win up to four extra free re-Spins due to the Avalanche feature, and huge multipliers.

You can speed the Avalanche feature up too, by clicking the spin button when you’re due for the next free re-Spin.

You can also play Gonzo’s Quest on any device you wish – not just desktops and laptops, but tablets and smartphones too. We played it on a laptop, but you can click or tap our links in the table above to play via your preferred device.