Whether it’s Halloween or not, this slots game by Red Tiger Gaming takes you on a ride around the streets to earn some treats. Featuring pumpkins galore – and even a human with a pumpkin head – you’ll have had more than the daily serving of vegetables once you’re done this pokie.

We take a look at whether this lesser known software provider offers enough features to compete with the top providers such as Net Entertainment and Microgaming.

The way to do things in the digital world is to simplify everything as much as possible. This is what Red Tiger Gaming have done with their pokie, Lucky Halloween, with just the spin button – represented by the two arrows – and the bet size visible under the reels.

There’s no way of changing the coin size, only your bet size from a minimum of $0.20 and maximum of $60 can be altered. You can locate Auto Play in the top right hand corner next to the paytable button too.

There’s 5 reels with 20 paylines and they are set on a backdrop of a cartoon entrance to a haunted house, to really set the scene.

Gameplay is incredibly simple and the RTP for this title is 94.48%.

Symbols and payouts on Lucky Halloween 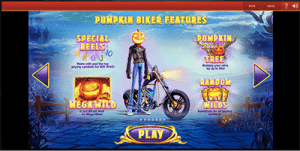 The symbols are quite appealing to look at with spooky cartoon characters offering big payouts.

Colourful cartoon 10 to A symbols have been used for the low paying symbols – spin three of a kind for a payout.

The middle to high paying symbols include the cupcake featuring bat wings, a potion bottle, a bandaged black cat, a hat, and a motorbike with the pokie’s logo on it. Spin three of a kind to win a higher payout than the 10-A symbols.

The highest paying symbol is the Wild, which is the pumpkin – spin at least three to receive a payout. This Wild shows up more than you’d think.

You can view the payouts for each individual symbol by clicking on the ‘Pays’ button in the right hand corner.

While there’s just the Scatter and Bonus symbols to look for there’s six features available on this title and they kick off when the pumpkin rider starts tooting his horn and rides on in.

The following features can be triggered;

If these mini features aren’t enough, there’s the Free Spins feature which players can activate by spinning at least three Scatter symbols. Here you can pick from one of the three cauldrons to see how many free spins you’ve won. What’s more the mini features are more likely to be triggered here.

Finally, there’s the Full Moon Bonus feature triggered by spinning at least three Bonus symbols. This isn’t just any old Bonus round either – once activated a huge trail down the haunted castle will appear featuring multipliers up to 800x. Pumpkin heads will appear and you can pick one to reveal how many steps you will take. This will take you up the trail, collecting multipliers as you go. You can continue doing this until you pick a pumpkin which says ‘Collect’ and the multiplier will be applied to your initial bet.

Audio and graphics of Lucky Halloween 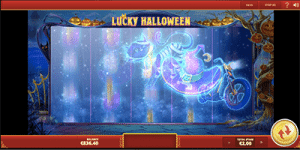 The graphics are bright and incredibly detailed. The background has been crafted to set the scene and the reels fit perfectly against the haunted house gates. The animations which occur on big wins, before and during bonus rounds, and just in the base game really make this pokie quite entertaining. For example, as we were playing the tree branch poked its arm out and juggled a pumpkin.

The sound effects on this real money online slot are incredible. There’s the main cartoon soundtrack – something you’d expect to hear from a Pixar film – and then there’s the added audio effects. These include eerie ghost sounds and howls in the background which make us want to keep the audio on for once.

Our thoughts on Lucky Halloween by Red Tiger Gaming

This pokie has left a great impression on us and if this is the quality all their games offer we will be happily reviewing many more of Red Tiger Gaming’s titles in the future.

The graphical animations are enough to spend a few dollars spinning Lucky Halloween, no matter what time of the year it is, but the bonus features keep us coming back for more.

With four mini features, free spins, and the chance to win up to 800x our stake – we will be playing this title all year round.