Players entering the world of online slots may want to start off with slots resembling traditional fruit machines, but still feature modern elements. Rival is one provider which offers a number of these types of machines, alongside their 3D i-Slots, including Money Magic.

There aren’t many features on this magic themed online slot, but there is a progressive jackpot attached which regularly gets up to the five to six figure mark. 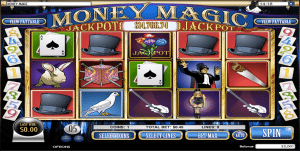 While Rival are renowned for their 3D i-Slots which feature interesting storylines, they also offer simpler titles. These include less paylines and basic graphics– but storylines can still be present.

Money Magic slot is one title considered to be more traditional as it offers just nine paylines across 5 reels. There’s just one coin size too, and it is set at 0.05. You can increase your bet by changing the bet lines – from one to nine – and the number of coins – from one to five however.

This results in the minimum bet of $0.05 available and the maximum bet of $2.25 per spin. This is incredibly low, perfect for low rollers. Additionally, higher limit players might be intrigued too since there’s a substantial progressive attached which can be won with such a small maximum bet. The bet size can be adjusted below the reels, next to the Spin and Auto Play button. 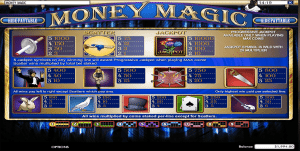 We haven’t gone into the theme too much as we aren’t big fans of the commonly used magician design. However, the graphics are kept simple, as we detail below, so it hasn’t been overdone.

What’s more, Rival have replaced the traditional A to 10 symbols used for the low paying symbols, with ones which tie in with the theme, including the wand, the cards, the top hat, the dove and the rabbit – all essentials if you want to become a magician.

The middle to high paying symbols include the sword, the shield with swords, the magician’s beautiful assistant, and the magician himself.

All of these symbols require a least three of a kind to earn a payout and pay from left to right on active paylines.

There’s also the top paying symbol of the weight, which pays even if you only get two of a kind on an active payline.

Other top symbols to keep an eye out for include the Scatter and the Jackpot symbol.

The Scatter, which is the beautiful lady laying down, offers a payout even if you only spin two and pay any way on active paylines.

The Jackpot symbol is the flowers and offers a payout with a minimum of two of a kind from left to right. It also triggers the progressive, as detailed below. What’s more, the Jackpot symbol also acts as a Wild and when it completes a win a 2x multiplier is applied. 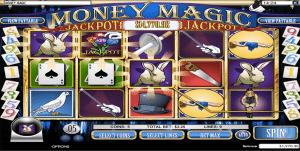 As we detailed above, there aren’t many features to this pokie. There is a Wild which performs its usual function substituting for all symbols except the Scatter and offering a 2x multiplier when completing Wins.

Unfortunately, this is it for the pokie machine – but there is a progressive.

The pokie kicks off with a short video featuring a magician waving his wand. This sticks with Rival’s policy of creating pokies with a storyline. If you aren’t interested, you can skip the video and be taken straight to the reels.

The graphics here aren’t as impressive as other Rival pokies, which is a bit disappointing, but if you are use to simple pokies you may enjoy them. Rival have done a good job in making sure each symbol ties in with the theme.

The audio is quite loud and almost sounds like slow rock – but when the reels spin there’s a suspenseful soundtrack which creates anticipation. If you aren’t a fan you can mute the audio via the ‘options’ button. 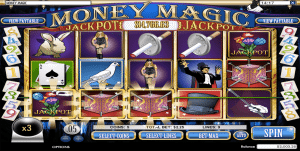 To spice the pokie up, Rival has added a progressive jackpot which can be won by playing the maximum bet – which is a measly $2.25 per spin.

Adjust your bet and spin five flower symbols to be awarded the major jackpot which accumulates every time a real money wager is placed on the title. The jackpot is usually in the five figure range but can get up to six figures too.

Our thoughts of Money Magic by Rival

We were excited to review this title by Rival, as they are renowned for exciting pokies. However, due to the simplistic nature which we aren’t use to we found it to be a bit lacklustre.

The absence of free spins or bonus features is a let down but this is combated with the addition of a progressive – if you like progressives. While you do need to play the maximum bet, it’s only $2.25 per spin. This makes the jackpot incredibly appealing – especially when it is over $100,000.

If you’re after a simple online slots game with the chance to win big, this title by Rival might just be for you.