Travel through time on this Ancient Egyptian themed pokie and have a chance at winning tens of thousands of dollars. While there are plenty of hieroglyphics plastered across numerous pokies, Microgaming have taken the common theme and stepped it up with a progressive jackpot attached in their Treasure Nile game.

Where to play Treasure Nile online

Available to be played in real money mode only, you can sign up to one of your favourite online casinos – we recommend Royal Vegas Casino for a dedicated Microgaming catalogue – and spin the Egyptian reels.

How to play Treasure Nile pokies 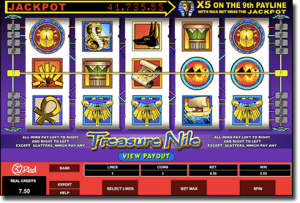 As a standard video pokie, the title features just nine paylines across 5 reels and 3 rows, with every payline required to be active to have a chance at the jackpot. What’s more this jackpot is available to be won on mobile devices too, so irrespective of whether you are playing on your smartphone, tablet, laptop or desktop device you can access the game.

The problem with this online slots game is if you do want to win the progressive you will have to spin the max bet of $4.50 every spin. Unfortunately, coin sizes can’t be adjusted, only the number of paylines and as we mentioned above all nine have to be activated to win the progressive prize. If you’re here for the graphics and standard gameplay instead you can play the minimum bet of $0.50 per spin – one payline activated – but we wouldn’t recommend it.

Another issue we have is the lack of features, and unlike Microgaming’s Mega Moolah title which offers free spins and multipliers for standard gameplay, plus the chance to win a million-dollar progressive, this title does not offer anything extra.

But that doesn’t necessarily mean this is a bad pokie, especially since there’s a prize worth tens of thousands of dollars attached.

The bright purple backdrop jumps out at you as soon as you open the nine payline pokie and we are treated to very simple, but very well done, graphics by Microgaming. The simplification of graphics means it won’t lag if you are playing on portable device – some video and 3D pokies can have this problem.

All symbols are square giving it a very structured look, while all the features you need to play the game are located under the reels. Unfortunately, you can’t change the coin size, as we detailed above, nor how many coins you can play – you can only adjust the paylines by clicking the ‘paylines’ button.

There’s a soundtrack which features a backing noise of chirping birds and suspenseful audio, but mute this if it becomes annoying by clicking the audio icon. 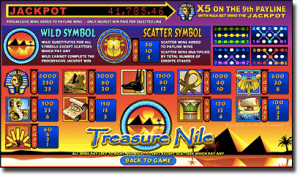 As we suggested before, the symbols have been crafted well – the 2D imagery doesn’t jump off the screen but it is quite a good looking pokie.

Microgaming tend to opt for the traditional A-10 symbols for their lower paying symbols, but here they haven’t – which adds to the game’s overall aesthetics.

There are nine standard paying symbols, with the lower payouts represented by reeds, a ship, a stone dome, and a scroll, with the top payout of 150 coins eligible by spinning five scrolls. Interestingly, the lowest paying symbol, the reeds, offers a payout just by spinning two – every other symbol requires at least three to be spun to win a payout.

The middle paying symbols are represented by the snake, the Egyptian fan, a hieroglyphic, and an Egyptian dog, with five dogs scoring you a 1500-coin payout.

The higher paying symbols include the pyramids and the Egyptian face statues, with five statues paying the top payout of 6000 coin. Additionally, the face structure triggers the progressive jackpot – we explain how below.

There’s also the Wild and the Scatter symbols to keep an eye out for, but only the Wild performs a special function.

The only special bonus to this title is the progressive – there’s no free spins or second screen bonus game unfortunately.

Still, the incentive is there with the progressive getting up into the tens of thousands and easily won on any spin.

Play Treasure Nile on your smartphone or tablet

As we mentioned above, Treasure Nile has been optimised for the HTML5 platform meaning it is compatible with Apple, Android, Windows and other smartphones and tablets.

Our verdict on Treasure Nile 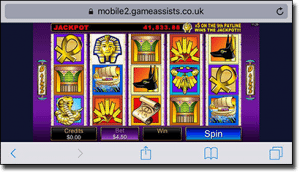 If you haven’t picked it up already, we think this progressive is a good title but it has many drawbacks.

While spinning $4.50 per spin to trigger a prize pool worth tens of thousands of dollars sounds reasonable, when you compare it to Mega Moolah’s $6.25 per spin to win millions it doesn’t really equate. If the minimum bet was smaller, without having to sacrifice the chance to win the progressive, it would definitely be a better title.

The graphics are excellent – Microgaming never let us down in that respect – but the lack of features on Treasure Nile is a bit disappointing too.

Overall writing our Treasure Nile slots review, we found it’s a great game if you’re new to progressives as there’s not too much going on to distract you from winning the pot, but there are a few titles we would suggest to more advanced progressive jackpot players.