Since 2012, software developer Thunderkick have been gaining recognition as a pokies provider set to change the way we look at these types of casino games. Specialising in creating fun online poker machines which scrap the traditional feel, Thunderkick have changed the aesthetics and the design to set the developer apart from the likes of Microgaming, and BetSoft. We take a look at the company under a microscope and the games which have developed as a result of their unique vision.

Thunderkick was created in 2012 by a team who once worked for the top leading software developer Net Entertainment. The company is based in Stockholm and holds a license certified from the Malta Gaming Authority. This license proves the online pokies developer offers fair games and maintains the MGA’s solid reputation.

Thunderkick’s mission is to develop ‘amusing games’ which focus on quality over quantity. This can be seen in their small number of pokies available – each remarkably designed. While there is only a small number of pokies available, their catalogue is constantly expanding with new additions found at the verified online casinos listed in the table above.

Thunderkick specialise in 3D pokies which each offer innovative graphics and a unique format.

These unusual features commonly found in their titles see the reels appear to be non-existent as the symbols float or connect vertically. Additionally, many of the titles have the same symbols – with the different values determined by being a different colour. This changes the dynamics of the game but once you get use to the new feel it can be quite entertaining,

You can find the following pokies by ThunderKick at the online casinos detailed above.

As you can see there aren’t as many titles as you will find by other top software providers but each title produced by Thunderkick are worthy of our attention.

We take a look at three titles in depth to explain what has become possible in real money pokies thanks to Thunderkick. 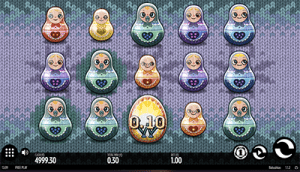 Featuring 5 reels and 17 paylines, Babushkas is based on the cute Russian dolls which fit inside of each other. Incredibly, Thunderkick have created the symbols to change size to follow this concept. Each doll has been created using 3D technology, while a bright soundtrack has been developed to add to the atmosphere.

There’s seven free spins to win plus additional features, including an upgrade of all low paying symbols once or twice. Keep an eye out for the Charm Bear and the Scare Bear symbols, respectively, to win.

This title may not be for everyone, but it is for those after a different feel – bright, quirky, and a chain reaction where the smaller the size of the symbol, the bigger the payout. 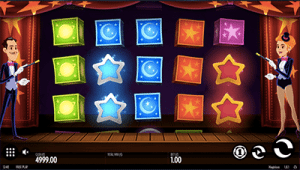 Magicious takes on a common theme and, through the use of 3D graphics, creates a uniquely designed title. Offering 5 reels and 10 paylines, the symbols appear as if they are floating in mid air – tying in the theme well.

Players are taken to a theatre where a magician and his assistant watch on as you spin the coloured boxes. The graphics have been crafted perfectly, as has the sound.

This win both ways pokie offers an Expanding Wild as the main feature – but it has an added perk. Spin it on reels 2, 3 or 4 and you will notice the Wild expands to cover the entire reel. Here you will be awarded with a free re-spin, with the Expanded Wild applied. You can re-trigger this feature continuously by scoring more Expanding Wilds too. 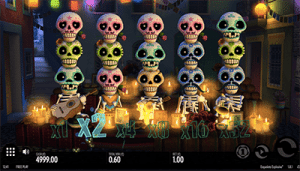 This is the title which put Thunderkick on the map – featuring 17 paylines across 5 reels. These reels are actually non-existent as the skulls – symbolising the Mexican holiday, the Day of the Dead – stack up on each other.

This title is incredibly beautiful to look at, but the features are what really attract our attention. Featuring a 32x multiplier, players can score huge payouts simply by winning consecutively. The multiplier starts at 1x and gets right up to 32x so you can easily win big in the base game.

Additionally, there’s the Explosivo Wild which sees eight surrounding symbols exploding with new ones falling into place. This also increases the multiplier helping you to get to 32x even quicker.