A Night in Paris pokie review

A Night in Paris pokie review

Paris is the city of love, we all know that, so it’s refreshing to see that BetSoft haven’t gone down the conventional route and has delivered a new twist in A Night in Paris: a cunning game of cat and mouse between a prodigal thief, Jacques, and his nemesis, a brute of a security guard called Jerome LaBask and his handy bulldog. All of this is set to the backdrop of a French museum.

Best online casinos to play A Night in Paris

As we have come to expect from BetSoft gaming, it is chock full of bonuses and features. If all that isn’t enough to hold your attention there is the running battle between the thief and security, Jerome LaBask. During plays Jerome and his trusty bulldog applaud and celebrate any wins you have along the way.

Where to Play A Night in Paris on the Web 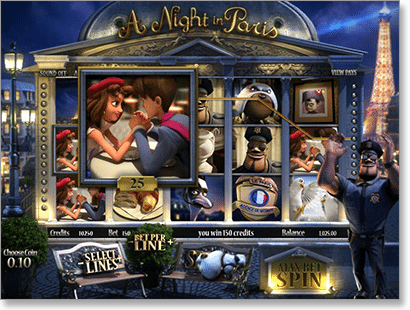 A Night in Paris is available to play at trusted online casinos House of Jack Casino, G’day Casino and Emu Casino. Each of these casinos are safe and easy to use and all of them offer enticing bonuses when you sign up.

Each of these casinos has their own safe, preferred banking options to deposit and withdraw funds but as a rule of thumb all three accepts Neteller, Paysafe Card and credit and debit cards. Check each site for their specific payment options for fund transfers.

Thanks to the BetSoft mobile arm of the company, ToGo, A Night in Paris is available to play through the above casinos on your iPhone, iPad and Android device. No downloads are required to play. This is just another brick in the wall of success for BetSoft.

A Night in Paris Pokie Features and Bonuses

A Night in Paris consists of three main bonuses or features. The first of which is the chase free spins which is triggered by three or more of LaBask’s Le Paris security badge on an active pay-line. Jacques, the thief, enters from the left hand corner of the screen, only to be spotted by the ever present LaBask and his bulldog. The two set off on a Benny Hill style chase for five free spins duration. 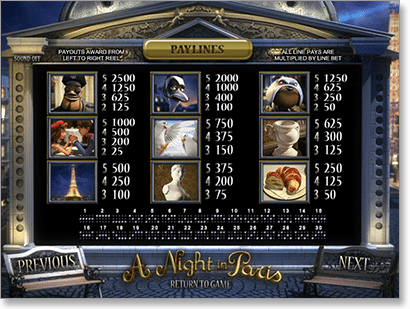 The second bonus is triggered when three or more scattered Napoleon paintings appear during play which triggers the Caught in the Museum bonus. This takes us to a second screen where we find Jacques in the museum, standing in front of an ancient urn, the Napoleon painting and a sculpture of an armless bust. You are given a choice of which item Jacques should steal first. The more you are able to steal undetected, the more you win. When LaBask swaggers around the corner though, he grabs poor Jacques and slams him to the ground UFC style.

Lastly if you manage to either get a Jacques symbol, a Le Paris security badge symbol and a LaBask symbol, or a LaBask, badge and Jacques in a straight line on reels one, two and three then you have triggered another bonus. Once triggered a sign will pop up on the screen, telling you to alert the guard of the thief.

Slot Symbols in A Night in Paris

The vivid, French themed symbols are priced, from highest to lowest as Jerome LaBask the security guard, Jacques the thief, LaBask’s bulldog, a pair of lovers, white doves, the antique urn, the Eiffel Tower, the armless bust statue and a croissant. There is also the Napoleon painting and the Le Paris security badge.

One let down with this game is the absence of a wild symbol but this slight misgiving is easily compensated for by the three bonus games that can be easily achieved.

So if you are feeling like an exciting French getaway without leaving the confines of your own home, give A Night in Paris a try. Good luck!