Due to all the rocking out with Net Entertainment’s Rock trilogy pokies, it’s time to catch up on some rest with some of the most classic bedtime stories planned for their new pokies releases. First on the list to nod us off to slumber is Little Red Riding Hood, but the features might just keep you awake.

With mini features and big win bonus rounds, we’re happy to be whisked away by NetEnt and into our childhood memories. 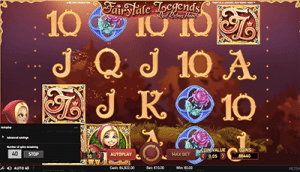 There’s 10 bet levels available, with coin sizes ranging from 0.01 to 1.00 offering a minimum bet of $0.20 and a maximum bet of $200 – suiting high and low rollers. All of the buttons to adjust the bet size and levels are located under the reels next to the spin, auto play and max bet buttons.

You can find out more about what each function does via the question mark icon in the bottom left hand corner. 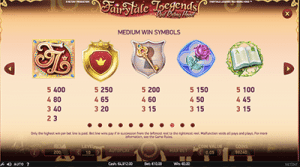 When you enter the woods with Little Red Riding hood you will find the A, K, Q, J and 10 symbols which offer the lower value payouts – spin three of a kind and your basket will be filled with a cash payout.

The middle paying symbols include the book, the rose, the key and lock, the emblem and the logo of the pokie. You need at least three of kind for all symbols to win, except for the logo where you only need two.

There’s a few more symbols in this online slots game you shouldn’t be wary of, unlike the wolf, including the Bonus symbol which is the treasure chest with three triggering the option to activate one of three bonuses. Two other symbols can be revealed here, including the Free Spins symbol and the Coin Win symbol, which trigger their own feature as we detail below.

Check the paytable for more information – click on the ‘i’ symbol to view the payouts. 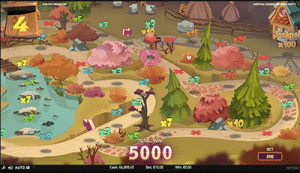 The first mini feature on this Net Entertainment slot which can be triggered, is the Fairy Magic Spin where a fairy appears and waves her wand to apply from five to nine medium paying symbols on the reels for a spin. This occurs at random.

The second is the Fairy Surprise Random Feature and occurs after a non-winning spin. Here, a symbol is randomly selected and other symbols will be transformed into the symbol until a win.

Finally, there’s the the Fairy Wild Spin feature, which is activated randomly and sees three to four Wilds applied on the middle reels. This results in a Sticky Wild Re-Spin for big wins. Additionally, it can be re-triggered as Wilds keep appearing.

Then there’s three major features which are triggered by spinning at least three Bonus symbols. You can then pick one chest from the three to reveal one of the following features; 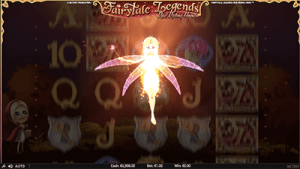 The graphics, as expected, are stunning. They run smoothly and the attention to the animation really captures the magic behind the fairytale being told.

While Little Red Riding Hood walks by the reels as you spin, she’s not really a huge part of the online slot itself, other than the Beware the Wolf Bonus. Instead, the fairy pops up a lot – with the animations whisking us away to big rewards. Additionally, there’s not much more to the background – just the forest which moves. It would’ve been better if the wolf was prowling around or grandma popped up with cookies.

The audio is quite nice with a whimsical soundtrack, but when the reels stop spinning there’s loud sound effects which adds to the suspense. You can mute this though, via the audio icon in the bottom left hand corner.

Our thoughts of Little Red Riding Hood by NetEnt

We hate to say this about one of our favourite software providers, but this title is similar to Lucky Halloween by the lesser known provider, Red Tiger Gaming. The mini features, and the extra bonus where you walk along a trail to receive multipliers are basically the same – so perhaps this is where the future of pokies are headed, but we aren’t complaining. The bonuses result in huge wins and we won 8000 coins alone in the Beware the Wolf Bonus.

While we don’t really understand the fairy – she belongs in Peter Pan, not Little Red Riding Hood – we do appreciate the mini features she delivers.

Overall, we’re excited for the future releases in the Legend Fairytale series from NetEnt if this is any indication of how good they will be.