Great 88 is not the first online slot to tap into the lucrative Asian slots market. Oriental pokies are incredibly common in the iGaming industry and therefore we have higher standards when reviewing any game with this theme. We take a look at BetSoft’s September 2016 release and whether the graphics and features of this Chinese themed title are worth your cash wagers.

Where to play Great 88 pokies online

BetSoft is renowned for the use of stunning 3D graphics, so we are excited in that respect – but whether the features, including a Bonus Wheel, measure up is what we are here to find out. 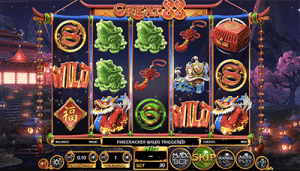 As per the name, the entire premise to this pokie is the number 8 – which is considered to be incredibly lucky in Chinese culture. It represents success and prosperity – key ingredients to an online casino game which is why so many are Chinese themed.

The reels are set on a mountain top, with another Chinese cultural addition of the cherry tree. There’s also a beautiful Chinese house too, which really sets the scene.

The title features 30 paylines across 5 reels and 3 rows with the highest possible win paying left to right. Before you press spin, set the coin value, which ranges from 0.02 and 0.10, and the bet level out of one to five. The means the minimum bet available is $0.60 and the maximum bet is $15.

Next to the bet size adjuster you can opt for Auto Play and have the reels spin automatically for as little as five and as many as 100 spins.

The RTP for the Great 88 is 94.3%, while the biggest payout available is one million coins. 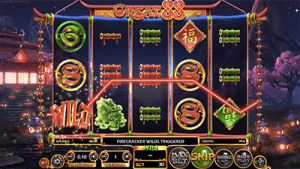 BetSoft have gone to great lengths in crafting this pokie. Each symbol has been designed to contribute to the overall theme. What’s more there’s seven standard symbols and four high paying symbols available. There’s also a Wild, but no Scatter – though this doesn’t mean there are no free spins.

The low paying symbols are represented by the firecrackers, with the smallest payout of these symbols offered by the single firecracker, and the largest by the triple firecracker symbol. You need a minimum of three of a kind on an active payline to receive a payout.

The middle paying symbols include the two green and two red Chinese symbols with a minimum of three of a kind paying from left to right on an active payline.

The high paying symbols on this real online slots game include the decoration, frog, lion and dragon, each of which requiring a minimum of three of a kind on an active payline for a payout.

The Wild, which is the eight firecrackers, also offers a payout provided you spin a minimum of three of a kind on an active payline. It performs its usual function of substituting for all symbols except the Lucky Boxes. These Boxes are the top symbols to look out for – we explain why below.

You can view the accurate payouts by clicking on the question mark icon under the reels, after you have adjusted your bet size. 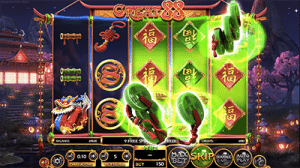 Players are treated to five different kinds of bonuses on Great 88, thanks to the red Lucky Boxes.

Spin three of these Boxes to trigger the chance to win the following bonus features;

The Bonus Wheel, triggered by the Golden Dumplings, offers eight free spins, 5x, 10x, and 20x multipliers, and the opportunity to spin the Mega Wheel as prizes.

What’s more, BetSoft have also included their Double Up feature where you can flip a coin to double your winnings – or lose them. 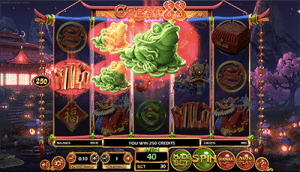 BetSoft has to have the best graphics in the industry when it comes to 3D pokies. The Great 88 is beautifully designed and a delight just to look at.

The background has been crafted into a Chinese garden on top of the mountains and we are transformed into Oriental realm. The audio is quite bright and exciting – especially on a win. There’s a serene soundtrack when the reels aren’t spinning, and the sounds come to life when they are. If you aren’t a fan of the audio simply mute it by clicking on the audio symbol in the bottom left hand corner.

The graphics and the audio are incredible on Great 88 which is a draw card in itself. But if you are here for the features, you won’t be disappointed.

While it appears it’s incredibly hard to land a spin on either wheels, the payouts from the other bonus features and the base game are large enough to keep us coming back for more.