Jungle Jim: El Dorado is a Microgaming pokies release from 2016 which features three-dimensional graphics and is set among a jungle backdrop with calming jungle sounds. Jungle Jim is an explorer, searching for hidden treasures in the legendary area of El Dorado. Jungle Jim is right by your side throughout the game, cheering you on as you land some big wins.

Below is all the important gaming information. Players can keep track of all their wins and other statistics via the ‘stats’ tab at the bottom left corner of the game. To check out all symbol payouts, visit Royal Vegas Casino.

The game also boasts an auto-play feature, and players can choose to alter the graphics settings (basic, standard and enhanced). All wins pay from left to right, all wins are multiplied by your bet per line and only the highest wins are paid per line. 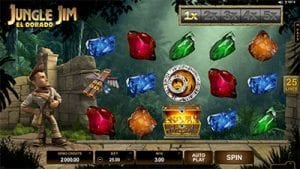 You will see that instead of the typical slots reels, ‘rolling reels’ are used for this game – one of the features that has become more and more popular in newer interactive pokies titles released online. With every spin, the symbols and reels fall into place, and with each paying spin, the winning symbols disappear, the rest of the symbols fall into place, and new symbols come crashing down for the chance of another win.

In addition to the ‘rolling reel’s feature, you will notice a multiplier atop the game, beginning at 1x and moving through to 2x, 3x, 4x and 5x. With every consecutive winning roll, your multiplier will increase by one until your winning run comes to an end. Within the free spins bonus round, the multiplier will grow even larger to 3x, 6x, 9x, 12x, 15x, allowing for some mega pay outs.

Who or what is El Dorado?

El Dorado was a term first used by Europeans to describe the mythical tribal chief of the Muisca native people of Columbia. It has been said that, as an initiation rite, he covered himself with gold dust and then buried himself under the waters of Lake Guatavita. However, the legends that surround El Dorado have shifted over the years – beginning as a man, then a city, to a kingdom, and then to an empire.

We mightn’t know the full story until Jim himself uncovers some of the buried riches.

Each of our endorsed Internet casinos are licensed and regulated, and are 100% legal for customers aged 18 years and older to access, depending on the online gambling laws of the country you’re playing from. They all offer some great free welcome cash bonuses for new players along with extra promos and bonuses such as free spins, loyalty points programs, free cash injections and more.

What we think of Jungle Jim: El Dorado

Jungle Jim: El Dorado has been designed in a similar style to Net Entertainment’s Gonzo’s Quest, using rolling reels and rich three-dimensional animations and graphics to create an immersive and compelling gaming experience. So while the idea isn’t fresh, the game itself still manages to capture our attention with its additional features such as the increasing multiplier in the base game and within the free spins mode.

We are still waiting for something spectacular to be released by Microgaming that can rival Net Entertainment’s Aliens pokies title (one of the best online/mobile slots created), but until then, the 2016 release of Jungle Jim: El Dorado gets our tick of approval. We rate the game 3.5/5.