The third and final instalment from Net Entertainment’s rock trilogy is here and it might just rock your world. Based on the power trio, players can head bang their way to a 114,000-coin win with Lucas Fox, Larry Wallis, and of course, the late Lemmy Kilmister.

Where to play Motorhead pokies online

If you aren’t aware of the NetEnt trilogy, the top casino software provider unveiled the map of the three rock n’ roll pokies at the beginning of 2016. The first title, Guns N’ Roses, rolled out at our favourite online casinos in April it didn’t disappoint. Following shortly after in September, Jimi Hendrix took the spotlight – though it wasn’t as popular as its predecessor. You can find these online slots by following any links in the above table – sign up now to win real money.

If you think Motörhead will be more of a pleasure to play, you can locate the title here too and enjoy DVD footage of the band’s concert when you open the pokie. Keep reading to see what else the title has in store. 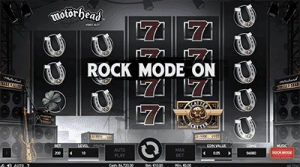 Each instalment to the NetEnt Rocks trilogy has featured a different format which shows NetEnt haven’t just slapped a new theme on the same type of poker machine. Motörhead has the most unique format of all of them, with 5 reels and 76 paylines – the layout is quite similar to NetEnt’s Dazzle Me.

There are 10 levels available to pick from with level one offering the minimum bet of $0.20, with the coin size set at 0.01, and level 10 offering the maximum bet of $200, provided the coin coin size is set at 1.00. This third instalment of NetEnt’s rock pokies trilogy also offers a similar RTP as the first two, of 96.98%.

The paytable offers a unique description of the band and a set list of the songs you can listen to while spinning the reels. The songs include their most popular hits, such as Ace of Spades, Iron Fist, Killed by Death, and Overkill. To listen to the soundtrack while playing, simply click or tap on the ‘rock mode’ option in the bottom right hand corner. Disable it the same way if you’re here for the payouts and features instead. 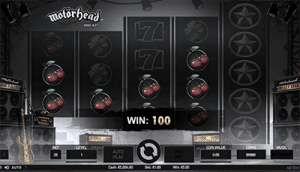 NetEnt have done an excellent job crafting the symbols here – even the low paying ones come across as grungy – but it could be due to the backdrop. These include a four leaf clover, cherries, and a horseshoe.

The middle paying symbols include the 7 and the Liberty Bell and you can tell NetEnt have used the classic poker machine symbols – we would’ve preferred a bit more detail.

The star and Lemmy himself are the top paying symbols with Lemmy scoring you the you the best payout.

There are two more symbols you should keep an eye out for – the Scatter and the Wild.

The Scatter symbol is represented by the Motörhead band’s emblem, Snaggletooth, and three will trigger the Free Spins mode if they appear on reels 3, 4 and 5.
The Wild symbol is the Ace of Spades symbol and it does the usual function of substitution for all symbols except the Scatter.

What gets fans of these rock pokies so excited is the potential off their features. We will start with the standard addition and then detail the more special features. 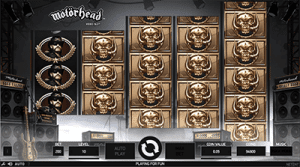 There are 10 Free Spins up for grabs, triggered by spinning three scatters on the last three reels. Mystery Reels are active during the Free Spins feature.

This feature sees at least one reel filled with Stacked Mystery Symbols and regular symbols and any Mystery symbols left once the reels stop spinning, turn to random symbols, excluding Scatters.

The Bomber feature is the final addition and is activated at random during the base game. Here, 10 to 15 Bomber Symbols will explode and scatter. These symbols will then transform into Mystery symbols which reveal random symbols – excluding Scatters.

This pokie is a huge hit from the moment you open it. The real footage visually enhances the entire gameplay atmosphere. Whether or not you are a fan of Motorhead, its safe to say the world was in mourning when Lemmy passed in late 2015. This title captures his rock n’ roll spirit well, in our opinion.

When it comes to the features, we did notice the Bomber feature is somewhat similar to the Mystery Reel feature, but if you can score the Wild or the Lemmy symbol, it isn’t a bad thing. The features do make for some big wins though, even with the lower paying symbols.