Powered by leading software manufacturer Net Entertainment, Reel Rush is an exciting online pokies game which combines the nostalgia of playing a 90’s video game with the thrill of winning big money. Reel Rush can be played at a variety of our recommended online casinos, so let us tell you why you should be experiencing the fun of this fast-paced slot. 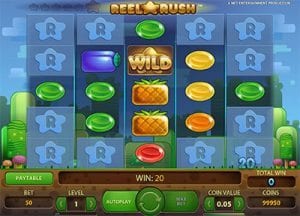 You could be forgiven for thinking you were playing your old Nintendo for just a brief second when launching Reel Rush. However, even if you weren’t a gamer back in the day, you will still be able to appreciate the style of this slot.

With the look and feel of Mario Bros, Reel Rush is one of the most innovative games to hit the market in recent memory. While it does not have a huge amount on bonus rounds or features, mini games or even random wins, it does possess Wild substitutions and a multi-way winning re-spin on any win which increases the ways for you to win until it peaks into a frenzy of free spins.

The game itself is a five-reel game with between 45 and 3125 ways to win – a truly unique set up in the world of online slots. You can choose the betting amount to best suit your playing style, with spins starting at 50 cents and increasing all the way through to $100.

Initially, the slots game starts with five reels and 45 win ways. When you land a winning combination the game automatically re-spins with a new reel configuration. With each re-spin, two additional symbols are activated on the reels therefore increasing the number of win ways. This can potentially continue, resulting in bigger and bigger wins.

Re-spins and free spins meter: Aside from the Wilds, Reel Rush re-spins and the free spins there are no extra bonus rounds or features aside from the extra ways to win which are mentioned above. However, this is to be expected as the re=spins are the main selling points of the game and can be lucrative within themselves.

The re-spins breakdown is as follows:

Free spins: If you win five times in a row you will be rewarded with an additional eight free spins with the whole board open for wins. This gives you a total of 3125 ways to win across the five reels and this is where you get the opportunity to win big. Although it doesn’t happen too often, it can be massive when you are lucky enough to land this feature.

Wilds: The wild symbol in Reel Rush is the golden power-up star which can appear on all reels except for the first. It substitutes for all other symbols in the game and can result in big wins as it is responsible for opening up the board. 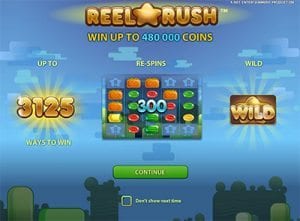 There are a total of 11 symbols that make up the Reel Rush pokies game and they include gems and fruit symbols. The coloured gems are of equal value and are the lowest paying symbols, with a minimum of three of the same colour required to win five coins, with five of the same colour scoring 50 coins.

As for the fruit, the lowest value is the blueberry and the grape, the latter having a top payout of 150 coins if you can spin five of them across the board. Apples and lemons are the middle value symbols, with players winning 250 coins if they can spin five lemons.

Reel Rush’s highest value symbols are the pineapple and the strawberry, with five strawberries set to see players collect a tidy payout of 1000 coins.

As mentioned above, the wild symbol appears on reels two through to five and substitutes for all other symbols in order to complete the highest possible winning payout in both the base game and once free spins have been triggered.

Reel Rush on your mobile phone or tablet

Reel Rush is available to play on most mobile and tablet casinos, with players across the globe recommending it as one of the best titles to play on your Apple, Android or Windows device due to its pristine graphics and smooth gameplay.

As a part of Net Entertainment’s mobile touch line of apps, Reel Rush has been specifically optimized with mobile players in mind, with its design compatible across a broad range of smartphones and tablet apps. Some of the mobile version perks you will enjoy include:

Where can I play Reel Rush?

You can play Reel Rush at a variety of online casinos which feature games from the Net Entertainment group, all of which offer a safe and secure way to play for real-money in addition to generous welcome bonuses. Our top-rated casino sites with NetEnt software are listed in the table above, with our top votes going to:

Is Reel Rush a hit or a miss?

While it lacks the bonus rounds and mini games which make many online pokies so exciting, Reel Rush is still a fast paced and enticing slots game which captivates your attention. The re-spins feature is sure to have you on the edge of your seat as the board continues to be un-locked, with the allure of major wins keeping you coming back for more and more.

While the free-spins round is relatively rare, it is something you must experience if you love playing the pokies – giving you the same thrill and sense of atmosphere of playing at a land based casino, all in the comfort of your own home.