Rook’s Revenge is one of the most entertaining and unique online slots going around. It is a five 5-reel, 25-payline online pokie, but that is about the only comparison that can be drawn between Rook’s Revenge and any other slot game. After five minutes, I was caught up like a little worm on a big hook.

I don’t know what Rook is trying to reap revenge against, but whatever it is, I think his mission has been achieved. Rook’s Revenge is another 3D BetSoft creation and one of its most unique and engaging experiences yet. 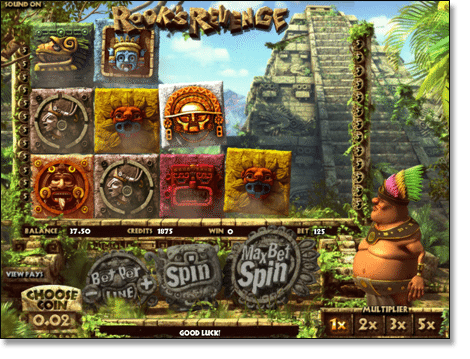 The five reels in Rook’s Revenge don’t spin like a conventional pokie. No. Each symbol or “block” falls into place from above the playing screen, crashing down into position for each spin, with dust settling afterwards. That was the first thing that caught my attention – a new twist on the conventional pokie and the attention to detail.

Then, two things in the bottom right hand corner of the screen caught my eye. The first was Rook himself: a portly, stern looking Aztec or Mayan who stands guard over the reels, but don’t be put off. Rook is not an intimidating figure. In fact he busts a groove, dancing, jumping and heel-clicking, doing cartwheels and the worm, sporting a big toothy grin every time you have a win. His excitement gets you even more involved and excited about winning.

The second feature with this online slots game was the multiplier table. This multiplier table is an absolute humdinger. The table starts at 1x your win and moves to 2x, 3x and then jumps to 5x. Every time you get a win in Rook’s Revenge, by connecting three or more symbols on a payline, the winning symbols then explode, leaving the remaining symbols to fall into their place, and extra symbols will rain down to complete the playing screen.

The symbols in Rook’s Revenge are easily differentiated by their colours. Trying to decipher what the actual symbol is though, is a little trickier. Here are the symbols in descending order of value and a guess at what is represented on each symbol. 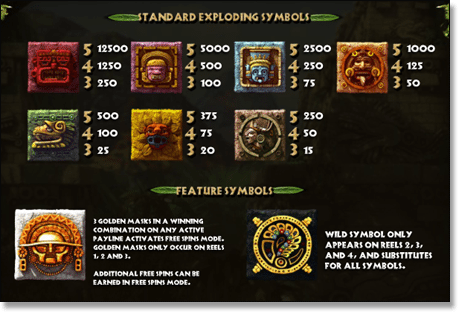 The Black and gold symbol acts as the game’s wild and only appears on reels two, three and four. It will substitute for all symbols to create a winning payline.

The Golden Mask symbol – which looks a bit like a bikie – only appears on reels one, two and three and if three appear on a winning line, the Rook’s Revenge Feature of 10 free games is triggered. Free games can be re-triggered during the feature, which is great to see. But the real perk of this feature is the fact the multiplier is increased for multiple wins from 1x, 2x, 3x and 5x during paid games to 3x, 6x, 9x and 15x during the free spin round. That sort of action should have any red-blooded punter excited with the possibility of some big wins – another exciting draw card to Rook’s Revenge.

Rook’s Revenge boasts the ability to bet one to five coins per line (all 25 paylines are always automatically enabled) with coin sizes available from 0.02 to 1.00. This allows for a minimum and maximum wager per spin of $0.40 and $125.00.

Sign up at House of Jack Casino to receive up to a $450 welcome bonus and 100 free spins.

Rook’s Revenge is also available to play at the top-rated BetSoft casino sites listed in our casino table above. All of these online casinos are easy to use and boast safe banking options such as credit and debit cards, Neteller and Paysafecard. Good luck playing Rook’s Revenge!