NetEntertainment is one of the leading lights when it comes to producing revolutionary and exciting online slots. Not only have they been praised for their pokies produced via their partnership with Universal Studios, but for their original titles too. This includes one of the most popular titles in their expansive catalogue – Starburst.

Where to play Starburst pokies online

The title has an arcade feel, and just one feature. But with 50,000 coins on offer it’s worth giving it a spin.

Starburst’s popularity stems from its uniqueness, originality, simplicity and subtle throw backs to the first fruit machines. It flies in the face of most conventional online pokies in it doesn’t rely on the time honoured free games feature to lure in players. Instead, Starburst has conceived the Starburst Wilds, which act as Sticky, Expanding wilds.

How to play Starburst 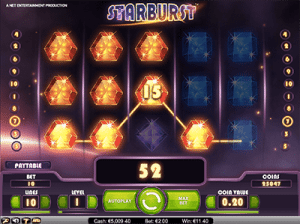 Starburst is a five reel pokie which stamps its individuality by straying from the normal 25, 20, five or even three paylines, by being a 10 payline game. The originality continues when you realise Starburst doesn’t just pay from left to right, but also right to left on the same 10 paylines.

You can play Starburst for fun or real money at almost any NetEntertainment powered online casino. Have a look at our promoted casinos and the fantastic welcome packages they all offer for new customers.

Starburst has a futuristic, highly synthesised background music track which suits the game so, so well. The sound effects from winning are exciting and explosive which keeps you playing. 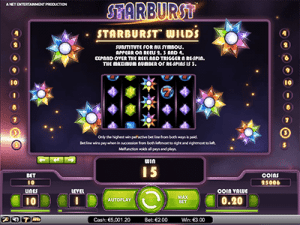 Starburst has gone down a different route and decided to discard the idea of playing card representations, ie. Ace, King, Queen, Jack and 10.

Instead NetEnt opts to use different coloured jewels and, in a throw back to some of the old school fruit machines, a BAR symbol and a ‘7’ symbol.

These symbols are quite simple – but perhaps that’s what gives this online slots title its edge. 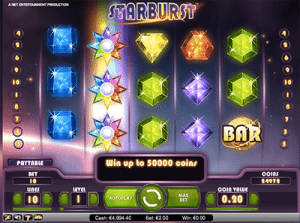 The Starburst Wild symbol appears on reels two, three and four only. Just one Starburst Wild triggers a re-spin where the wild will expand to cover the entire reel and remain sticky.

The Starburst Wild feature can be re-triggered up to two more times by spinning up the Wild symbol during your re-spin. This raises the possibility of having reels two, three and four completely covered with wilds.

This paired with stacked symbols and left to right and right to left pays is how you can win up to 50,000 coins on Starburst.

Our verdict on the Starburst slot

My only critique is that there isn’t another bonus or feature game to match the Starburst Wilds feature. One simple re-spin can often be a little disappointing. Another bonus game or feature would elevate Starburst to an even higher level. Aside from that though this game is near on faultless.