Before Ben Affleck destroyed the image of our favourite vigilante, Christian Bale lit up our screens in three outstanding Batman films. One of the best however, was the Dark Knight as it included the late Heath Ledger who delivered a chilling performance as the Joker. Since the movie was such a huge hit, the pokie had huge expectations and fortunately Microgaming haven’t let us down with this exciting, action-packed superhero-themed title – plus there are four progressive jackpots attached.

Note: The Dark Knight slot game was taken off the market in 2017, so unfortunately this game is no longer available to play online. This online slots review is for information purposes only. Read our guide to online slots to find out more about the best games in 2019.

Microgaming was the right software providers to execute this pokie, because only the top providers should be responsible for delivering to such high expectations.

The best part is they’ve included all the actors from the film, including Christian Bale as Bruce Wayne (Batman), Heath Ledger as The Joker, Aaron Eckhart as Harvey Dent, Gary Oldman as Jim Gordon, Maggie Gyllenhaal as Rachel, and many more familiar faces, and this is all thanks to the partnership with DC Entertainment.

But this isn’t the only reason why this pokie is so enjoyable to play – rather the 243 ways to win, the extra Wild symbols, the Wild reels, and of course the progressive jackpots really grabs our attention. 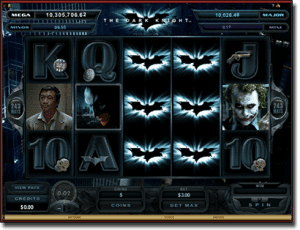 The Dark Knight, by Microgaming, features 243 ways to win across 5 reels meaning all paylines are scrapped, but this does unfortunately mean a somewhat higher minimum bet of $0.30 per spin – there’s a maximum of just $6.00 per spin.

Coin sizes only range between 0.01 and 0.02, but since it is a medium to high volatility pokie you may need a larger sized bankroll in order to play for a fair amount of time. Additionally, the expected RTP is is 96.30% – quite high for a progressive.

A unique feature to the pokie is the Cinematic Spins which sees clips of the film on a winning combination – which is perfect for film buffs. You can turn these off if you aren’t a fan or don’t like the interruptions via the Options button at the bottom left of the game screen.

The soundtrack can be switched on or off here too, but we prefer it to be on due to the suspenseful ambience it creates and when the Cinematic Spins or on too it feels like we are watching the movie while having the chance to win up to seven, sometimes eight figures (with the Mega progressive jackpot).

The Dark Knight symbols and payouts

Microgaming have used as many actors as possible to represent the symbols on the reels, though they must have run out as they’ve included the 10, J, Q, K, and A for the lower paying symbols. The payouts are dependant on your bet so select your wager size then click the paytable to view the possible pays.

The middle to high value symbols are represented by the characters in the movie including Lau (Chin Han), Salvatore ‘The Boss’ Maroni (Eric Roberts), Mayor Anthony Garcia (Nestor Carbonell), Rachel (Gyllenhaal), Jim Gordon (Oldman), Harvey Dent (Eckhart), The Joker (Ledger), Bruce Wayne (Bale), and Batman (Bale with a mask). We like Microgaming included both Bruce’s face as well as Batman as it adds to the storyline.

The Wild is represented by the bat symbol and it substitutes for all symbols except the Scatter, it can also turn into a Stacked Wild randomly throughout the game.

The Scatter symbol is the Joker’s face spray painted on a wall, with the iconic smile in the shape of Batman’s symbol – perfectly done in our opinion. At least three will trigger the Free Spins feature, and two will offer a payout depending on your bet size.

There’s no extra Bonus symbols as the Bonus features are triggered randomly – making it even more suspenseful and exciting.

There are a number of features including a randomly triggered Bonus where the Joker or Batman will appear and award you with a cash prize. This can occur during the base game, or during the Free Spins feature.

You can win up to 15 free spins by landing at least three Scatter symbols, and these commence with a 2x multiplier applied. When you score a Wild or Scatter symbol the multiplier increases and you can get up to a 5x multiplier. There are no re-triggers during the feature however.

The best part is there are four progressive jackpots attached, including the Mini (starts at $10), Minor (starts at $100), Major (starts at $10,000) and Mega (starts at $1 million) jackpots. The Mega offers the largest jackpot and can occasionally climb up to the eight figure mark. The bonus is triggered randomly throughout gameplay, without the need for a minimum bet per spin, and a Wheel will appear where you then choose a character to reveal the prize you have won, including one of the four jackpots.

Our verdict on The Dark Knight

If you haven’t been able to tell by our overall tone throughout the article, we absolutely can’t get enough of this real money casino slot.

The theme alone, including the Cinematic Spins, the use of the real images and clips from the movie, and audio, does the film justice while the addition of the four progressive jackpots is excellent. Plus, the 15 free spins with a 2x multiplier – and possibly a 5x multiplier eventually – on a 243 ways to win format means potential big wins.

You do need a substantial bankroll to keep the game rolling, but the fact the bonuses can be triggered randomly means you could get lucky.