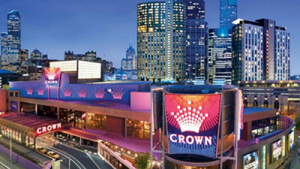 CROWN Resorts has received a rather gloomy report from its Macau operations, with profits tumbling by over 60 per cent.

It’s a disastrous result for James Packer’s company and takes the gloss off the steady growth in profits from Crown’s strong performance in Australia.

Overall, Crown Resorts posted a net profit of 948.9 million, with $602 million of this number made up from the sale of part of the company’s share in the Macau-based Melco Crown.

Crown Resorts CEO Rowen Craigie spoke to media and investors about the results at midday Melbourne time on Wednesday, the same day the financials were released.

Despite the continued downturn in Macau, Crown Resorts posted a $3.23 billion profit from its local casinos, rising 0.8 per cent on the previous financial year.

Even with the strong performance at home, the company is reeling from a 22 per cent fall in overall profits. The only casino in Australia owned by Crown to suffer a slump was Crown Perth, which had fewer high rollers go through the doors.

Another factor in the 5.5 per cent decline in Perth was the state’s sluggish economy, which traditionally reflects in the casino’s profits.

On a more positive note, the results narrowly beat predictions from financial analysts across the globe, with the share prices responding accordingly and rising to over $14.

The company has received plenty of attention lately, with the plans it released to split Crown Resorts into different entities drawing both praise and condemnation from investors and media.

The other big topic has been the company facing legal action surrounding the proposed development — Barangaroo Casino and Hotel — an action the company has vowed to fight, along with staff publicly rallying for improved wages at the Melbourne complex.

Looking for a high-class online casino?

Our top recommended online casino site for United States is Raging Bull Casino thanks to its current welcome package bonuses offering hundreds in free cash and free spins, as well as premium gaming software from the best in the iGaming industry, including BetSoft, Microgaming, Net Entertainment and Play’n Go.