Leo Vegas to rock out after release of Motorhead pokie game

Net Entertainment’s Motörhead pokie is finally here and to celebrate Leo Vegas are putting on a Rock Festival jam packed with free spins and incredible prizes.

This head banging offer sees players in with the chance to win a signed guitar by the late Lemmy Kilmister, $100 000 in cash prizes, as well as free spins.

To win the guitar, simply deposit $10 and play it on the third and final pokie from NetEnt’s rock trilogy to earn a ticket, up until October 24. You can also score extra tickets by playing LeoVegas Live Celebrity Blackjack Party – all you need is an Ace of Spades. The winner will be announced on October 25 live at 3am (12pm AEST) at the Live Blackjack Party table.

If cash prizes are more your style you can play to earn your spot on one or more of the five weekly leaderboards, each offering $20,000 in prizes for 100 lucky players, taking place as follows;

Earn points by playing any of the 375+ pokies at Leo Vegas, but keep in mind you can earn more by playing the titles from the NetEnt trilogy:

The more points earned, the higher up the leaderboard you will climb where you can win the following prizes;

You may notice the prize order has been mixed up, making things even more interesting. 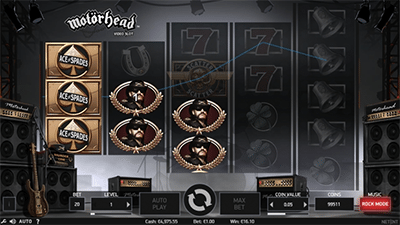 Following the release of Guns N’ Roses and Jimi Hendrix by Net Entertainment, Motörhead has a reputation to live up to. With 5 reels, 76 paylines, and the chance to win 114,000 coins – we have to say it meets the hype.

Opening with live concert footage, fans of the British rock band can enjoy four of their biggest hits while playing the grunge-themed pokie – select ‘rock mode’ to listen.

There’s a wide range in terms of betting limits – a minimum bet of $0.20, and a maximum bet of $200 – and each symbol has been crafted impeccably to make a visually appealing title.

There are three features too, including the Mystery Reel feature, where up to five reels turn into Super Stacked Mystery Symbols; the Free Spins feature, with up to 10 free spins available; and the Bomber Feature, where you can score up to 15 mystery symbols.

How can I win these Motorhead pokies prizes?

You will need to be a member of Leo Vegas for the chance to win real money and to take part in the Rock Festival, but you can sign up in just a few minutes by following our links. Read more about Motörhead here.

Motorhead or Leo Vegas not to your tastes? Players from United States can always hit up Raging Bull Casino for hundreds more of the best online pokies games suiting multiple moods and personal preferences.