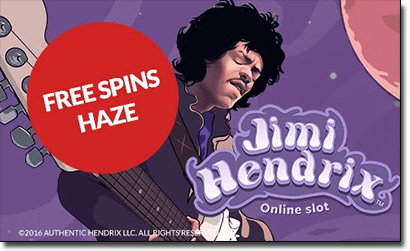 To celebrate the upcoming release of Net Entertainment’s Jimi Hendrix pokies game, Guts Casino is getting into the spirit of rock and roll with a huge three-day music festival of free spins galore. This promo is only running for another day, so waste no time and sign in at Guts.com now before it’s too late.

Don’t worry if you’re musically illiterate, or don’t know the D string on a guitar from the A string, this free spins fest is all about the pokies. Here’s how it works:

From the 18th to 20th of April, every time you deposit and play over $100 of real money bets on NetEnt’s Guns N’ Roses pokies game at Guts, you’ll receive free spins to use on the new Jimi Hendrix pokies game that’s being unveiled on April 21st.

The amount of free spins you receive is based on the amount you wager on Guns N’ Roses, with the following freebies up for grabs on the Jimi Hendrix game:

Your free spins will be credited to your account on April 21st, ready to use exclusively on the Jimi Hendrix Online Slot. At Guts.com there are no wagering requirements on free spins, so it’s a genuine free for all!

To say we’re excited about the Jimi Hendrix pokies release is a giant understatement. Riding the coattails of the 2016 launch of Guns N’ Roses pokies, Jimi Hendrix is the next release in the NetEnt Rocks collection, a trio of music themed pokies that will include a Motorhead game come September. The Guns N’ Roses pokies become an instant player favourite at online casinos, offering a genuine GNR soundtrack and more bonus features than you could poke a drumstick at, which makes us so chuffed to see what the Jimi Hendrix game will bring.

Jimi Hendrix is set to be rolled out at all leading NetEnt casinos, including G’day Casino, Thrills Casino and Leo Vegas, but Guts is the only one offering the chance to get boosted free spins before the game has even been unveiled. Head on over to Guts.com ASAP and start placing real money bets on Guns N’ Roses to get you amped for tomorrow’s release.

If you’re new to Guts, register for an account using our links and you’ll receive a matched deposit bonus of $400 plus 100 free spins to use on Starburst. If Guts doesn’t accept players from United States or you’d rather try another casino site, we recommend Raging Bull Casino as our top-rated casino site for players from United States, which has some excellent welcome bonuses and promotions available for new players.
Tags: GutsPromo
Show More

Beat the Guts.com team in poker and win $2500 in prizes