A new month is fast approaching and with that comes a new slot from Microgaming, Hot as Hades.

This slot keeps up with the very popular medieval theme present in new slot releases lately, though it has its own modern and unique twist to the theme.

Additionally, we’re drawing closer to the release of Bridesmaids, and while we take a lot at the new Hot as hades slot, we also have an exciting sneak peek of the Bridesmaids slot below.

You can play both of these titles at our no.1 Microgaming casino Royal Vegas.

We have a feeling things are about to heat up with this slot machine and we don’t just mean the title.

Interestingly, we were recently treated to the Legend of Olympus slot, by Rabcat via the Microgaming platforms, last month, which saw Zeus taking on Hades. Now we are getting an insight into Hade’s perspective as we follow him on his adventures. 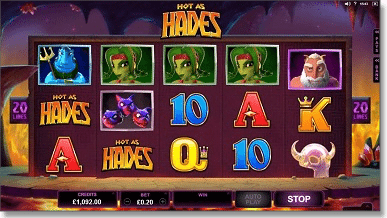 This new slot, set to hit Royal Vegas and other Microgaming casinos next month, features a quirky animated medieval theme following Hades, which is the cheeky looking character with his hair on fire; Zeus, the white bearded man who we’ve seen before; Medusa, the green snake lady; and more.

With 5 reels and 20 paylines, Hot as Hades offers players both free spins and another extra bonus round. The Wild symbol, represented by Hades himself (which is incredibly fitting as he is quite wild), acts the same as it does in a lot of Microgaming slots in that it substitutes for all symbols, except scatters, and doubles these wins.

With two bonus features, namely the Super Mode Free Spins and the Quest for the Crystal Bonus Game, we can see why this is going to be a hot choice in July.

Players are granted with five free spins in the Super Mode Free Spins feature, which are triggered at random throughout the base game, and while they do not have a multiplier applied if you can land three Held Wilds you will get a 2x multiplier.

The Quest for the Crystal Bonus Game is what we really want to trigger though, which can be done so by landing three or more Scatters, which is the crystal bull skull. There are five levels, which include;

The much anticipated Bridesmaid slot will be hitting Microgaming casinos soon and we have the promo video for you to check out.

Based on the hilarious film, Bridesmaids, the Microgaming slot features all of our favourite characters and funny one liners across 5 reels, and from the preview we’re guessing when you win clips from the movie will appear. Additionally, we believe you will also be treated to a number of bonus games throughout the game.

You can play both of these titles at our no.1 Microgaming casino — Royal Vegas — where you can claim a 100% match bet up to the value of $1200
Show More