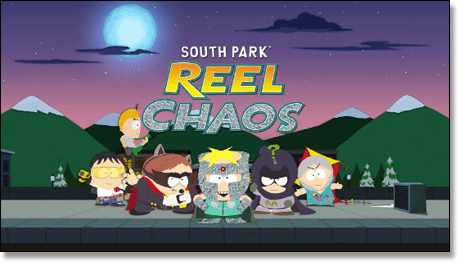 >>>Play South Park: Reel Chaos for real Australian dollars or for practice cash at www.Thrills.com and grab up to a $500 matched deposit bonus and 50 free spins.

The new South Park pokie is a five-reel, 20-payline game and our favourite fourth-graders (Cartman, Kenny, Stan and Kyle) return as superheroes to protect the city from Professor Chaos (Butters). The minimum and maximum bet (subject to change) is $0.20 and $100.00, suitable for all players. The game can also be played in freeplay mode.

Here’s a taste of the South Park: Reel Chaos action

Each character has its own unique features and they include: Cartman’s stacked wilds, Kenny’s multiplier, Stan’s multiplying re-spin and Kyle’s overlay wilds.

Each feature is activated randomly during the game.

Find out more about each feature here.

The exclusive Mintberry Crunch Epic Bonus Spins feature is activated when three or more bonus symbols appear anywhere on reels 1, 3 and 5 in the main game – Mintberry Crunch (Bradley Biggle) fights up to four different enemies while your multiplier increases with every defeated enemy. Defeat all enemies and a victory bonus is won.

Net Entertainment continues to build on its reputation as one of the chief interactive software developers in the online gaming industry, and we can expect ample more feature-packed and graphically advanced pokie games in the near future.

For now, there is plenty to keep you busy in the South Park: Reel Chaos pokie game, with the characters appearing all over the place at any time with an array of great bonus features. Good luck, and enjoy one of the most popular TV shows now available as a highly enjoyable real money online slot.

Play live dealer roulette at Guts to win $2,500 in prizes