It Came From Venus pokie review

It Came From Venus pokie review

When you play a BetSoft pokie, you step into a whole new world featuring incredible animations and 3D graphics, instead of just spinning inanimate reels to win. It Came From Venus transports us to a farm owned by a comical looking farmer called Skeeter, and we follow his ambitions to keep his secret – which happens to be an alien flytrap called Butch sent from Venus – from government officials.

Where to play It Came From Venues pokies online

The theme stays true to BetSoft’s usual way of doing things – coming up with an original, and sometimes quite comical, storyline and executing it perfectly with 3D technology – and the title forms part of BetSoft’s Slots3 collection with a progressive jackpot attached.

It Came From Venus theme and format 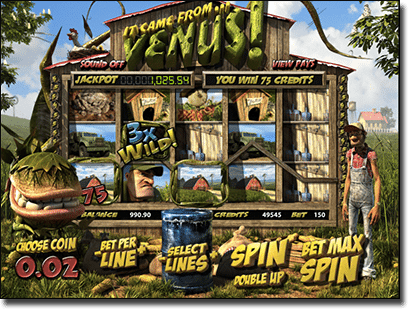 When you first click or tap the title to get playing – you can the pokie at top recommend BetSoft online casinos (we detail these below) – the entire screen illuminates with a short introductory video detailing the story, which you can skip.

Once we learn we must help Skeeter the 5 reels appear, featuring 30 paylines, on the backdrop of the farm and both Butch and Skeeter are situated by the reels. These hilarious looking characters light up on wins and make interesting noises throughout gameplay, which adds to the unique ambience.

The coins range from 0.02 up to 1.00 and the minimum bet is set at $0.60 with the maximum set at $150 per spin – which is somewhat higher than other pokies but this is due to the progressive jackpot attached which sees a percentage of the player’s bet contributed to the total prize pool.

The farmyard noises and ukulele add to the pokie, adding authenticity to the theme, but if you find these noises distracting you can click or tap the sound button in the top left hand corner.

Additionally, the RTP percentage for It Came From Venus is 95.80%, which compares favourably to other top real money online slots.

It Came From Venus symbols

The higher value symbols are represented by Skeeter and Butch. Butch gets you the biggest payout of the two, with five scoring you 500 coins and the progressive jackpot too, if playing the max bet.

These are the standard symbols, and you can view their payouts by clicking or tapping on the paytable link. There’s also a few other symbols to keep an eye out for.

We will start with the Scatter symbol, which is the sign featuring the text ‘Do Not Trespass’. It pays the most of all symbols (excluding the progressive), with a payout of 3125 coins by spinning five. This is its only function.

Next up is the Wild symbol, featuring the text ‘Wild’ and a random multiplier number. It substitutes for all symbols except for the Scatter, Bonus, and Free Spins symbols.

The helicopter represents the Bonus symbol and if you spin three you will trigger the Save The Plant Click Me feature.

Finally, the Free Spins symbol is represented by the sack. Instead of spinning a certain number in one spin, you simply collect the sacks, which appear on the middle reel, and once you have five you will activate the Feed Me Free Spins feature.

It Came From Venus in game features 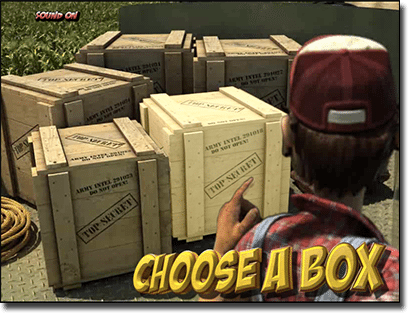 With all the symbols we’ve just detailed, we’re sure you want to know about what features they activate – which includes quite a few.

First up is the Stacked Collapsing Wins, which is similar to Cascading Reels but this feature is only triggered when at least two reels, from reels 1, 3, and 5, appear with the same symbols. Here, the winning combination will receive a 2x multiplier and then collapse to give you another chance at winning. You can win up to 40x your bet if you get all three reels with the same symbols.

Next is the Save The Plant Click Me Bonus, which is triggered by three helicopters on reel 1, 3, and 5. You will be treated to a video of the army officials stealing Butch, as well as Skeeter sneaking onto the truck to find him. Then an array of crates will appear and you can click them, with every empty box scoring you a cash prize, while finding Butch will end the bonus.

Then there is the Free Spins bonus and once you have collected the five sacks you will trigger the 12 free spins, which also features Sticky Wilds for huge wins.

There’s also the Double Up feature – a revamped Gamble feature – where you will be taken to a new screen where apples are thrown at Butch and you have to guess whether it will catch the apple or not to double or lose all your winnings.

Finally, there’s the progressive jackpot attached which can get up to the five figure mark – sometimes six on rare occasions – which can be won by spinning five Butch symbols at max bet.

This pokie has us feeling as though we are watching a Sci-Fi film and the graphics are incredible – though you may see a bit of lag if you play the ToGo version on your smartphone or tablet. If your device can handle the high resolution required, it is a very enjoyable pokie – and not just visually.

With so many features available to trigger you’re on your toes for every spin. The videos which tie into the story line are also an added bonus if you enjoy this type of thing – you can skip them otherwise.

We triggered the Click Me bonus almost instantly and won quite a big coin payout and while it took a while to trigger the Free Spins bonus it was worthwhile in the end. We tried the Double Up feature a few times too, since the feature offers 50/50 chances of doubling our bet – just don’t do it too many times. The progressive is a nice incentive, but the online slots game is quite rewarding in itself.