Some pokies themes are based on snapshots of what your life could be like if you won big, and one such title which features this theme is Mega Fortune by Net Entertainment. Mega Fortune has a huge progressive jackpot plus two smaller progressive jackpots to give you the hope you may one day own the many luxury items which grace its reels, including a fancy boat, diamonds, cash and more.

If when playing the online slots game for real money you manage to hit the Mega jackpot, especially when it has climbed to eight figures (it regularly does) you will become an instant millionaire – and you could even break records.

In 2013, this progressive made the Guinness Book of World Records for the largest amount won on an online pokie – the player won over $17.8 million with a bet of just $0.25. Since then, the pokie regularly pays out at a seven or eight figure mark without a huge minimum bet per spin, which is why we love this title so much. 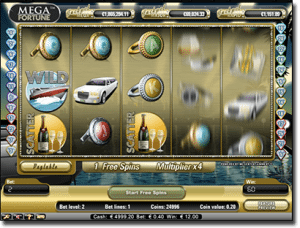 Getting down to the basics, Mega Fortune is a 5 reel and 25 payline video pokie with the addition of three progressive jackpots.

The coins range from 0.01 up to 0.50 and the minimum bet is set at $0.25 with the maximum set at $50 per spin. There’s no set bet to be played in order to win the progressive jackpots, as seen with the record breaking win scored at the minimum bet.

The title opens with the setting of what looks to be a luxury island and the reels appear which seem to be encased in diamonds.

The easy listening music gives you the idea of the soundtrack which would accompany your life if you were to win millions – but if you aren’t a fan you can mute it via the audio icon in the bottom left hand corner.

This title also has a 96.6% RTP which is quite high for a progressive.

The lower value symbols have been represented by the J, Q, K and A symbols but NetEnt have done something quirky here and incorporated them into designer rings – just for the added luxury effect. The top payout here is 150 coins, won by scoring five of the ‘A’ encrusted rings.

The middle value symbols are represented by a glass of bourbon and a cigar, a roll of money, and a watch, with the top payout of 300 coins won by scoring five watches.

The highest paying symbols include the limousine and the Wild, which we detail below. Score five of the limousines for a payout of 1000 coins. 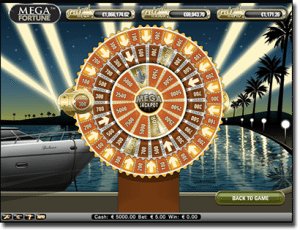 The Free Spins feature is activated by scoring at least three Scatter symbols and here the symbols will turn into a Pick Me Bonus type game where you click to reveal the number of free spins and the multiplier applied – between 1x and 5x can be won.

If you manage to score at least two more Scatter symbols during the Free Spins feature you will trigger additional free spins or a bigger multiplier, with no limit on the number of times you can win again.

The Mega is the largest jackpot and is linked across a large network – all online casinos which host the game see their player’s contributing to the prize pool. It kicks off at $1 million and grows rapidly.

The Rapid and Major progressives are both smaller in size, starting off at $10,000 and $1000 respectively.

In order to have a chance at winning one of the three progressive jackpots you need to score at least three Bonus symbols. Here, a Wheel-Of-Fortune type bonus will appear, and the wheel will spin landing on either a cash prize or one of the progressives.

Mega Fortune has to be one of our favourite online slots, and not just because of the progressives attached, but because of the regular payouts and the excitement the Wheel Bonus creates.

So even if you don’t win the progressives (but we all hope we will), it is still a fun and exciting pokie to play.

Where to play Mega Fortune?