The Secrets of Atlantis pokie review

The Secrets of Atlantis pokie review

ATLANTIS is a legendary ‘lost’ island first mentioned in two dialogues of Plato, a Greek philosopher, back in 330 BC. Leading online slots developer NetEnt has drawn inspiration from this Ancient Greek allegory to create ‘The Secrets of Atlantis’, a five-reel, four-row online slots game with 40 pay lines and an underwater, mystical theme which also boasts a host of unique features.

Where to play The Secrets of Atlantis pokies online

How to play The Secrets of Atlantis

The Secrets of Atlantis is available to play through your web browser at a wide range of online casinos, which is great for players as it does not require any downloads. The game itself is available to play for free and real-money, with the minimum bet amount being 20 cents right through to $200 per spin, making it an ideal pick for casual punters, high rollers and everyone in-between.

The game offers a variety of opportunities to win, including win both ways which opens up the possibilities for players to collect by paying on symbols left to right and right to left.

In order to play slots for real money, you must first create an account with one of our recommended online casinos, make a deposit and claim your bonus offer. Once you have completed these steps you can start playing – just select your coin size and bet level, hit the spin button and keep your fingers crossed for a bit of luck.

With its mystical, underwater setting you can expect to see some interesting symbols when playing The Secrets of Atlantis.

Some of the low-paying symbols include floating sea creatures trapped within bubbles such as crabs, jellyfish and turtles.

Higher-paying symbols include pearls and gemstones.

There are also a variety of bonus symbol features which can be spun during the game such as:

Nudge Wild: The Wild symbol in The Secrets of Atlantis is a mermaid, however it is unlike any Wild you have seen before.

Because she covers four rows, the mermaid may be fully or partially displayed across the board when she is spun. When this happens you may only see part of her head or the tip of her tail. When this occurs it becomes what is known as a ‘nudge wild’, with the mermaid being nudged either up or down to cover the whole reel. This same phenomenon also occurs during the Colossal Symbols re-spin, with the potential for the mermaid nudge wild to cover the whole board. 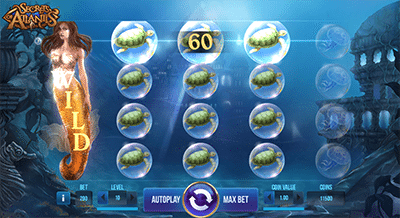 Colossal Symbols re-spin: This feature turns reels two through to four into one huge reel complete with Colossal symbols.

A Colossal Symbol is a block of three x four symbols which forms one big symbol which can be fully or partially displayed on the screen depending how they land on the reels.

If a reel containing a Colossal Symbol is highlighted, players receive an additional Colossal re-spin which gives them the opportunity to win big, particularly if the Nudge Wild appears on the board, by matching the Colossal Symbol with standard symbols appearing on reels one and five.

Highlight feature: This feature is active for every spin during gameplay and randomly highlights certain positions on reels two, three and four. If the highlight covers the entirety of all three reels and the end of a spin, the Colossal Symbol re-spin bonus is triggered.

Play The Secrets of Atlantis on your mobile device

Having been developed by Net Entertainment, The Secrets of Atlantis is available to play on your mobile phone or tablet device with an easy-to-use interface which encapsulates all the fun and excitement of the PC version.

As part of the NetEnt Touch range, the game has been specifically optimised to fit on the smaller screen with touch screen controls. It also boasts sharp sound and top notch graphics to retain the atmosphere players have come to expect when playing online pokies.

There are a variety of online casinos which offer The Secrets of Atlantic title, however we know with a multitude of options it can be hard to know which sites offer a reputable service.

To make things easier for our readers we have hand-picked our top rated casino websites, all of which offer safe and secure gaming, with encryption software in place to ensure your details are protected at all times.

Additionally, all our our recommended online casinos offer a sign-up bonus for first time players, matching your initial deposit to give you a generous amount of cash to start you on your winning way.

Best online casinos to play The Secrets of Atlantis

While it lacks some of the more innovative bonus and free spins features we have come to expect from Net Entertainment, the Secrets of Atlantis is still a quality pokies game which boasts a nice theme, good quality sound and graphics and some fun gameplay.

It does have some excellent qualities to like about it, with the Nudge Wild and Colossal Symbols giving players the opportunity to win big.

Overall, whilst Secret of Atlantis is not our favourite online slots game, it is still definitely one to check out and hopefully you are lucky enough to win big.