If you’re looking for a pokie to get you in the mood for a Walking Dead marathon you can bet your life Net Entertainment’s Zombies will get you there.

Where to play Zombies pokies online

The top leading software developer has captured the eeriness of the undead, in this 5-reel real money pokie and while it isn’t based on the HBO television series – or the comics for that matter – the theme hits the nail on the head. We take a look at the title and whether the features are as well put together as the design.

Players can find Zombies at a number of our top online casinos as listed in the table above – but we played it at Bgo.com where you can get up to 50 fair spins upon your first deposit if you are a new player.

Featuring 5 reels and 20 paylines, Zombies is set in an abandoned shopping centre which really sets the scene. The attention to detail, including smashed windows and blood smeared on the ground, as the gory symbols spin in the forefront, show why NetEnt are considered to be one of the best software providers in the industry.

Additionally, the soundtrack isn’t overpowering – the unnerving sounds make each spin more suspenseful but you can mute this via the settings. 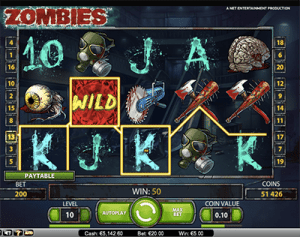 There are 10 betting levels, with the lowest coin level of 0.01, and the highest of 1.00. This sees a minimum bet available of $0.20 and a maximum of $200 per spin. Adjust your bet size via the buttons underneath the reels. The paytable is located just above these buttons and here you can view the payouts for each symbol.

NetEnt have crafted the symbols to tie into the theme and while they have stuck with the 10 to A symbols for the lower paying values, they do appear to fit in with the design. 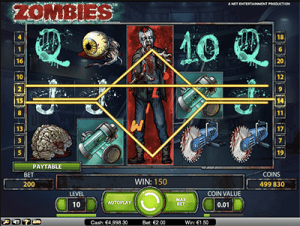 There’s also a Scatter symbol, which is represented by the the green capsules containing biohazardous solution; Wilds, which is the red symbol with the text ‘Wild’; and then there is the Stacked Wilds, represented by the zombie. Each trigger special features or payouts.

There’s numerous special features to Zombies which can be triggered throughout gameplay.

Standard Wilds on this online slots game can appear on reels 1, 2, 4, and 5, and perform their usual function where they substitute for every symbol except Scatters to earn you bigger payouts.

The Stacked Wilds, appear only on the middle three reels and will be nudged up or down to cover the reel to complete a winning payline. Unfortunately, this bonus can only be activated during the base game.

Then there is the special Wild feature where up to six of the symbols are transformed into Wilds provided the spin hasn’t resulted in any other feature. This offers big wins, but this feature can only be activated during the base game. 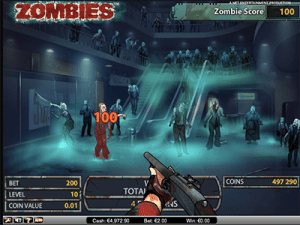 Finally, players can score five free spins by spinning three Scatter symbols on the middle three reels. There’s a multiplier which will be applied on a win, and increase from 2x to 10x on consecutive free spin wins. What’s more, you can win extra after each free spin as a random amount of zombies will appear and are shot at. The more killed, the more coins you win which will be added to your free spin wins. There’s a Zombie Score metre which will keep track of how much you have won too.

Our thoughts on Zombies

Since we are obsessed with the Walking Dead we have a soft spot for Zombie themed pokies – but only if they are done well. NetEnt have presented the theme, symbols and format quite well here with an eerie soundtrack to match.

The high RTP makes playing this pokie quite enjoyable – regular wins are always appealing. However, the small number of free spins awarded in the Free Spins feature can be quite disappointing. This is made up for with the chance to shoot zombies in between spins though, adding a video game feel to the title.

Overall, this title is a great addition to NetEnt’s extensive pokies catalogue which you can find at the online casinos detailed in the table above.